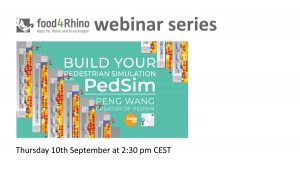 PedSim is the pedestrian simulation plug-in for Grasshopper.

In PedSim, People move from Start Gate to Destination Gate, following the best route, avoiding obstacles and other People. If they see a Target of their Interest, they will go to that Target, stay a while and re-route to the Destination Gate.

Peng Wang (Designer and Software Developer) will demonstrate functions and basic modeling process of PedSim, and new features in PedSim Pro, with examples and case studies.

PedSim has been available for download since 2017 at https://www.food4rhino.com/app/pedsim. It has accumulated 7000 downloads. The users are designers, researchers and educators all over the world. PedSim is an elegant solution to pedestrian simulation software. Thanks to the power of Grasshopper and Rhino. PedSim doesn’t have an independent UI. The program is minimal and very flexible. It has strengths and weaknesses. To a new user it also has a learning curve. This webinar will talk about PedSim’s functionality, touch on its inner workings, and answer some questions. It will help users to use PedSim to its full extent. PedSim has evolved into a more powerful product – PedSim Pro. This webinar will briefly talk about some key improvements using examples.