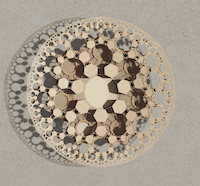 Including Rhino v7 preview, plus live Q&A with McNeel.

Join Simply Rhino and McNeel for this Rhino User Group meeting featuring a customer presentation from Mamou-Mani and then a special demonstration of Rhino v7 from Simply Rhino followed by an extended and live Q&A with you and the McNeel (developers of Rhino) team.

First up is Arthur Mamou-Mani presenting the latest projects from his eco-parametric architectural London based practise, Mamou-Mani.

The second part of the meeting is your chance to see the latest and greatest tools in Rhino v7 and then to hear from and ask questions of McNeel, the Rhino developers, themselves!

Visit the event page (linked to below) for more details and to book your place at this live event.